Skip to content
Home » Blog » The Durian – But don’t breathe while you eat it. 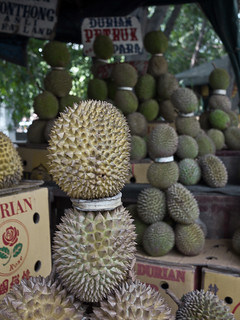 I travelled around asia about 20 years ago, and one lasting memory I have is of the street stalls selling Dorian.  In southeast Asia, the dorian is the “king of fruits”, possibly because of it's large size, typically weighing in at up to 3 kilograms (6.6 pounds).

This fruit looks like a large spikey melon, but smells worse than my socks after a days trekking in Chang Mai (although I believe some people say it is “fragrant”).

I cannot remember where it was, maybe Thailand, where people are banned from taking it onto public transport because of the smell. Well I just saw a new article about a flight that was delayed in Indonesia because the cockpit smelt of Dorian.

“We were already sat on the plane but we wanted to get off because it smelled too bad,” said Abdullah Saleh, a passenger who later switched to a different flight. Ten passengers cancelled their flights…. Read the full story Indonesian flight delayed because of foul-smelling tropical fruit

Of course, the Dorian is packed with nutrition.  An article on Fox news describe this fruit as follows:

The durian fruit from Southeast Asia is popular for its flavorful pulp that tastes like an un-sweet pineapple with seeds that have an almond flavor. The fruit contains simple sugars like fructose and sucrose plus some simple fats, and eating it provides a quick energy boost. Durian is a good source of vitamin C as well as a host of B vitamins (niacin, riboflavin, B5, B6, and B1), not normally found in fruit. It also has high levels of the amino acid, tryptophan, which promotes calming and aids sleeping…More at Discover the goodness of exotic fruits – Fox News